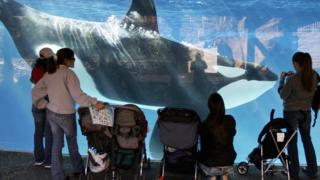 SeaWorld has been banned from bringing wild killer whales to its park in San Diego, America.

It has also been told to stop breeding orcas in captivity in a ruling from the California Coastal Commission.

They gave the park permission to double the size of its orca enclosures on the condition that breeding and bringing in new whales stopped.

It comes after criticism of the way the whales are treated there, something SeaWorld has always rejected.

Animal rights activists have welcomed a ruling by the California Coastal Commission, an agency that makes big decisions on major building projects in that area of America. 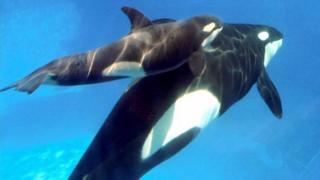 SeaWorld had put in plans to spend $100m (£65m) to expand its orca facility, which the commission approved.

But their decision came with several conditions. SeaWorld cannot add any new whales from the wild to its San Diego tanks, and none of the 11 orcas currently at the park will be allowed to breed there.

SeaWorld said it was disappointed with the ruling. They issued a statement that said: "Breeding is a natural, fundamental and important part of an animal's life and depriving a social animal of the right to reproduce is inhumane." 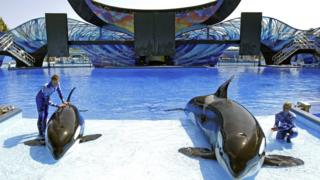 AP
The ban on breeding orcas, and bringing in whales from the wild, only applies to SeaWorld's San Diego park and not to the ones in San Antonio and Orlando.

Groups that have criticised the park said they were pleased with the decision.

The group, People for the Ethical Treatment of Animals, said: "The commission's action ensures that no more orcas will be condemned to a nonlife of loneliness, deprivation and misery."

The breeding ban will not apply to the 13 other whales at SeaWorld attractions in San Antonio and Orlando.