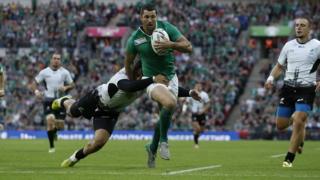 Ireland beat France at the Millennium Stadium in Cardiff to come top of Pool D.

The final score was 24-9 to the Irish with tries from Rob Kearney and Conor Murray.

By winning the group Ireland have avoided a quarter-final match against New Zealand. Instead they'll face Argentina and France will play the All Blacks. 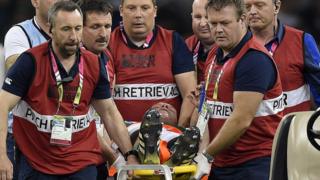 AFP
Ireland captain Paul O'Connell had to be taken off on a stretcher after injuring his hamstring.

Despite the win it looks like captain Paul O'Connell could be out for the rest of the tournament after injuring his hamstring in his thigh during the game.

Ireland coach, Joe Schmidt, said that he would have a scan to look at the injury.

Flyhalf Johnny Sexton and flanker Peter O'Mahony also picked up injuries but both could be available for the quarter-final stages.