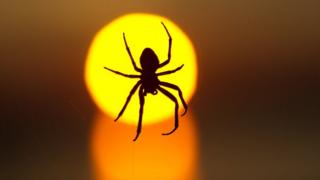 They're creepy, they're crawly and they're never far away.

As the summer comes to an end, our eight-legged friends often head indoors to escape the chilly weather.

But experts say that this year, the little creatures might be slightly bigger than usual, because of summer weather we've had.

You've been telling us about the spiders that you've been spotting...

We've seen big spiders and little spider in the bathroom and in our bedrooms. I'm a spider fan!

I saw the fattest spider I've ever seen. It was so scary I couldn't walk past it. It was massive I didn't think it was from this country. We found out it was a female false widow spider.

I've seen loads of spiders all over my house. Some have been massive. I'm not scared of spiders but my brother is terrified of them.

I don't like spiders especially daddy longlegs. They give me the creeps.

Hi Newsround. I think spiders are great unless they're massive.

I saw a very big spider and I'm not a fan of spiders.

I found a little something in the shower the other day! Maybe a little bigger than normal! We carefully picked it up and took it outside… It's legs were HUGE!

False widow spiders - how dangerous are they?