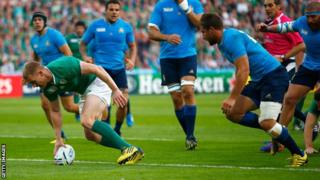 Ireland won their quarter-final place at the World Cup, but only after a strong challenge from Italy.

They've now qualified for the last 8 of the Rugby Union World Cup.

Ireland boss Joe Schmidt said: "That game was exactly what we expected.

"We have been allowed to cruise through the first two games and it was a shock to the system to come against a tier one side who needed to win to stay in the tournament.

"France are another level up - we will have to raise our game again. We will work on that this week and hopefully come up with the goods."