Chat: Do you think a 5p plastic bag charge a good idea? 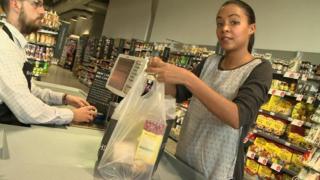 From Monday shoppers in England will be asked to pay 5p for every new plastic bag they use.

The charge is being introduced to try to cut down on waste and litter caused by people throwing away old bags.

Now, in most shops in England, if you want a plastic bag for your shopping you'll have to pay.

Do you think the 5p charge a good idea?

I think it's a good idea because I don't want to live in a world littered with plastic bags. And it's working!

I think it is a good idea because it will encourage people to reuse their bags instead of having to buy new ones when they go shopping.

I don't think they should charge 5 pence because not only are they earning money for shopping items but also they are making money from the bags. It's just not right!

I live in Wales and paying for bags is working here, so why not in England.

Send your comments to newsroundcomments@bbc.co.uk