Massive sinkhole opens up on street in Hertfordshire 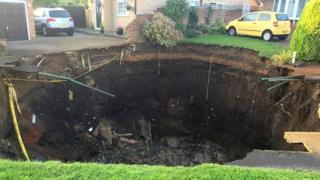 A massive sinkhole has opened up in the middle of a street in St Albans, Hertfordshire, forcing some people to leave their homes overnight.

The 66ft (20 metre) diameter hole spread across a front garden and driveway on the street, and is about 33ft (10 metres) deep.

The local Council say five homes had to be evacuated and 20 people were taken to a centre set up nearby.

People on the street said they heard a crash before the huge crater appeared. 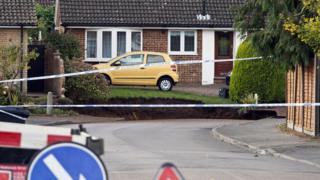 Engineers are currently on the street to decide how best to fill the crater in.

No-one has been injured and no homes were damaged.

Find out more about what causes sinkholes by looking at our special guide.

Sinkhole appears on beach in Australia

Giant sinkhole in Russia gets bigger

Investigation into cause of a sinkhole in Manchester