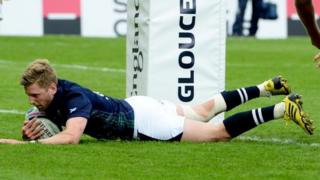 Scotland have started their Rugby World Cup campaign with a 45-10 victory over Japan at Kingsholm stadium in Gloucester, England..

Japan were hoping for another victory after they pulled-off a famous win against South Africa on Saturday.

The Brave Blossoms led briefly in the first half, but Scotland scored five tries in the second half to win and put them top of Pool B.

How to win at rugby - by Scottish kids

Rugby World Cup: Behind the scenes with Ireland squad