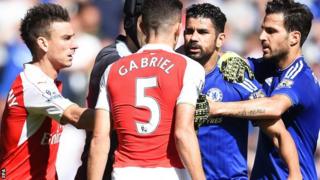 EPA
Chelsea face Walsall, Newcastle and Southampton in their next three domestic fixtures

Striker Diego Costa will miss Chelsea's next three domestic matches after a Football Association charge of violent conduct was made against him.

Costa denied the charge, relating to an incident involving Laurent Koscielny during Saturday's 2-0 win over Arsenal.

Costa put his hands in Koscielny's face before clashing with Gabriel, who was sent off but had his three-game ban taken away earlier on Tuesday.

In a statement, Chelsea said they were "disappointed" with the verdict.

Costa's ban covers Chelsea's League Cup match at Walsall on Wednesday along with Premier League matches against Newcastle and Southampton.