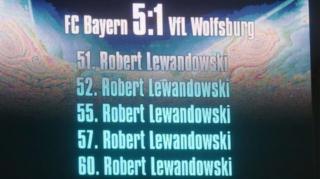 Bayern Munich striker Robert Lewandowski stepped off the bench at half-time against Wolfsburg to score five goals in nine minutes during a 5-1 comeback win for the German football giants.

We take a look at the records he broke, the reaction to his haul and compare his achievements to others.

Here's how he scored his five...

Getty Images
Two minutes later, he took three attempts to score the third - first hitting the post and then forcing a save

Getty Images
It took him more than three minutes to add his fifth, with a brilliant acrobatic volley
Lewandowski scored more league goals in nine minutes than... 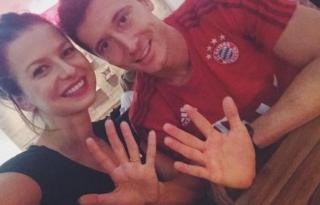 Striker Robert Lewandowski said: "This was just crazy. Five goals, that's just unbelievable. I just wanted to shoot and wasn't thinking about what happened afterwards. I am very, very satisfied. This was a great evening for me.

Bayern Munich boss Pep Guardiola said: "I am very happy for Robert. For his confidence and our future this was extremely important.