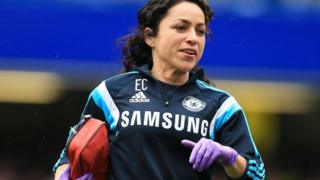 Carneiro had her role reduced after Mourinho told off his medical staff for treating Eden Hazard during the 2-2 draw with Swansea on 8 August.

Chelsea asked Carneiro to return to work but she has decided not to.

The Football Association, who look after football in England, is looking into a complaint that Mourinho used abusive or sexist language towards her.

Chelsea say they do not comment on staffing matters.

Eva Carneiro and head physio Jon Fearn went onto the pitch to treat midfielder Hazard in the closing stages of the draw with Swansea.

It meant the Blues were down to nine men, with goalkeeper Thibaut Courtois having been sent off, and Mourinho said the duo had not thought about the situation properly.

Carneiro lost her place on the bench and was no longer allowed to attend matches or training sessions.

Two days after the incident, she posted a message on Facebook thanking the public for their "overwhelming support".

Mourinho stood by his decision to remove her from her role, adding he had a "good relationship" with his medical staff.