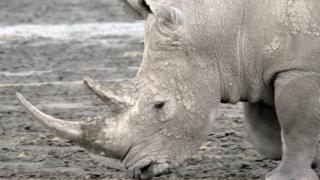 Wildlife experts have warned that the number of rhinos in South Africa is dropping sharply and more needs to be done to stop people targeting them for their horns.

The ivory from their horns can be sold for lots of money in countries like like China and Vietnam and so poachers often risk their lives to hunt the animals.

Official figures show more than 1200 were killed last year for their horns and 750 have been targeted so far this year.

South Africa is home to more than 70 percent of African rhinos, which are an endangered species.

Improved security patrols and dogs are being used to protect the places where they live.

The black and white rhinos live in Africa, while the other three are native to Asia.

White rhinos are the largest species of rhino and one of the biggest animals on earth - they only eat grass but they can produce up to 20 kilograms of dung per day!