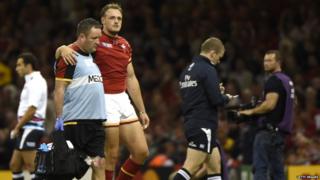 Cory Allen, who plays in the centre position, scored a hat-trick of tries, but had to go off in the second half with a leg injury.

He is now set to miss the rest of the tournament.

Other Welsh players, Samson Lee, Paul James, Dan Lydiate, and Aaron Jarvis all received injuries in the match too. 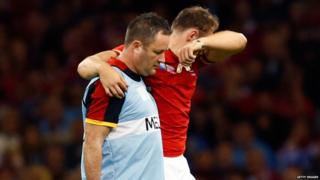 Getty Images
Wales now have seven players who have been injured

Star player Leigh Halfpenny was already ruled out of the tournament after getting injured in a warm up match against Italy.

Wales's next match in Pool A is against hosts England on Saturday at London's Twickenham Stadium.

Rugby World Cup: Behind the scenes with Ireland squad