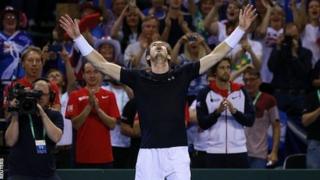 Andy Murray took Great Britain through to a first Davis Cup final since 1978 with victory over Australia's Bernard Tomic in Glasgow.

Britain will now face Belgium away in the final, which will be played from 27-29 November.

The last time Britain won the Davis Cup was in 1936. 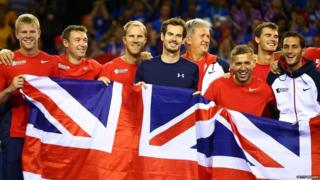 Andy Murray on BBC TV: "Winning for your country and your team-mates means such a lot. The crowd were unbelievable from the first ball to the last. I didn't feel great the whole weekend to be honest. I've been struggling with my back, but I just tried to disguise it."

GB captain Leon Smith: "He's quite good isn't he? It's pretty amazing watching Andy's work over the whole weekend, he fights so hard and he's got the quality. He executed it perfectly today."