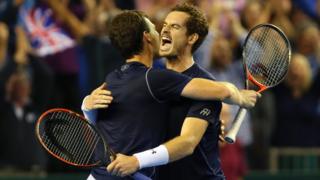 Britain's Andy and Jamie Murray beat Australia's Lleyton Hewitt and Sam Groth to open up a 2-1 lead in the Davis Cup semi-final in Glasgow.

The match went the full five sets and took just under four hours for the brothers to overcome the Australians.

So, what does it mean? Well, get excited - because if Andy Murray beats Australian number one Bernard Tomic in Sunday's opening reverse singles, Britain will be through to their first final since 1978.