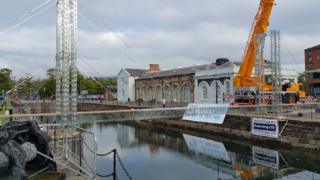 Engineering students in Belfast have set a new world record for the largest ever Meccano construction.

The bridge, made entirely from Meccano, has been built with the help of local school children across Belfast's Clarendon Dock.

It was unveiled to the public on Saturday. 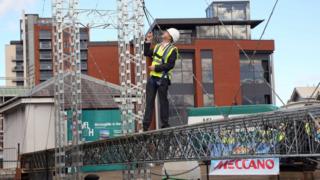 Pacemaker Press
Around 11,000 pieces of Meccano were used to build the bridge

The project is part of a Queens University Belfast programme to encourage kids to think more about careers in science, mathematics and technology and engineering when they're older.

Around 11,000 pieces of Meccano were used to build the bridge, which weighs 600 kilograms.

"If you count all the nuts and bolts and washers, there's approximately 70,000," said Dr Danny McPolin, in charge of the project.

"In terms of the longer pieces, if they're all laid out end-to-end I think it would be about 3.8 kilometres long. So it's a lot of Meccano". 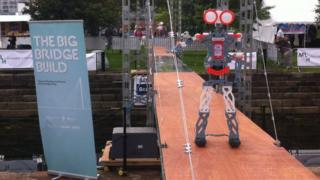 Another Meccano construction crosses the bridge on Saturday

"We see this event not only as an opportunity to celebrate the students' and staff's incredible work over the past year, but also a chance to give local children an insight into the exciting courses on offer".

How do Lego make their bricks?