Stunning photos of the sky at night

The winners have been announced in the 2015 Astronomy Photographer of the Year competition, with fifteen-year-old George Martin from Leicestershire winning the prize for Young Photographer with his photo of a comet.

Philippe Rowland, 7, was highly commended for his photo of the solar eclipse that plunged Britain into darkness in March.

The photos will all be on display at the Royal Observatory in Greenwich, London until next year.

George Martin
George Martin won the Young Photographer of the Year with this photo of Comet Lovejoy taken in Market Harborough in Leicestershire. 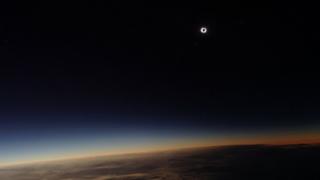 Philippe Rowland
Seven-year-old Philippe Rowland took this photo of the total solar eclipse from a plane above the Faroe Islands. He took the snap on his tablet.

Ethan Chappel
Ethan Chappel from Texas in the USA was also named runner up for this photo of Jupiter and its moons.