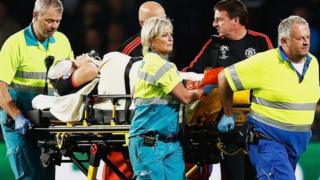 20-year-old Shaw will have an operation on his return to Manchester, the club said.

He was treated on the pitch for 10 minutes after Hector Moreno's tackle.

"It was a very bad tackle. He had the oxygen mask on and was crying in the dressing room," said boss Louis van Gaal.

Shaw has started all of United's eight games this season, as well as playing in England's European Championship qualifiers against San Marino and Switzerland.

Yet with just nine months to go until Euro 2016, Shaw has faces a tough battle to get himself fit and ready in time to get into the England squad again.

Less than an hour after suffering the injury, Shaw wrote on Twitter: "Thank you everyone for your messages, words can't describe how gutted I am, my road to recovery starts now, I will come back stronger."

Memphis Depay scored the opener for Manchester United before Hector Moreno, who has apologised for his tackle on Luke Shaw, headed in an equaliser just before half-time.

Luciano Narsingh then nodded home in the second half to secure victory for PSV Eindhoven.