A service is being held at Westminster Abbey today to remember the people who died during the Battle of Britain, 80 years ago.

The Battle of Britain was a series of game-changing battles in World War Two, which were fought entirely in the air.

In the summer of 1940, Germany was winning the war and the British army had been driven out of France by the German Nazis.

America and Russia had not joined the war yet, so Britain and its pilots from the UK and other countries like Poland were alone in the fight against Nazi Germany and its leader, Adolf Hitler.

But why did the 'Battle of Britain' taking place in the skies prove to be so important?

BATTLE OF BRITAIN IN NUMBERS:

Germany knew that to win the war they'd need to invade Britain and the best way of doing that was from the sky.

The German air force (called the Luftwaffe) wanted to destroy Britain's aeroplanes, so that they could have a clear route in. So, the Germans began bombing British airfields and factories in the early summer of 1940. 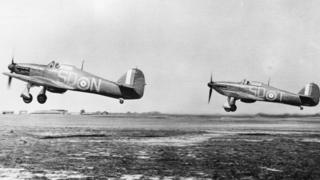 Getty Images
During the Battle of Britain the Royal Air Force mainly used two types of plane to fight off the Germans. Spitfires and the Hurricanes pictured taking off here.

To start with, the British RAF (Royal Air Force) had fewer pilots and planes than Germany. However, Britain dramatically increased production of planes like Spitfires and Hurricanes, and improved their military tactics. The RAF were able to defend Britain from wave after wave of German air attacks. 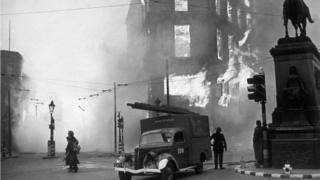 Getty Images
London was heavily bombed during the Battle of Britain in what is know as The Blitz.

In September 1940, the Germans bombed British towns and cities in attacks which became known as 'The Blitz'. London was bombed for 57 nights in a row, and it looked as though the Germans were gaining strength.

However, on 15 September 1940, the RAF managed to successfully fight off two massive German attacks. Germany was running out of aircraft and supplies, and two days later Hitler postponed the plans to invading Britain. September 15 became known as Battle of Britain Day.

During the battle, the British Prime Minister Winston Churchill made a famous speech which included the line, "never in the field of human conflict was so much owed by so many to so few." After this, the RAF pilots who fought in the battle became known as "the few".