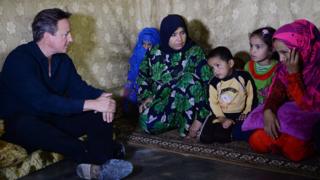 The Prime Minister David Cameron has visited a refugee camp for Syrians in Lebanon, which borders the war-torn country of Syria.

The purpose of his visit was to see how money from Britain is helping to support those living in the camps.

Mr Cameron spoke to families living in the camp which is less than a mile away from the border in the Bekaa Valley.

He said that Britain would continue to give money to the camps as well as helping to educate children living there. 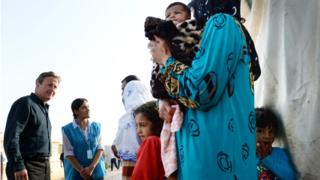 "For thousands of refugees, this money means a meal for their families, the security of a home with basic sanitation and clean water, and for children it means an education, so we don't lose a generation to the Syrian conflict," said Mr Cameron.

More than one million people have left Syria to find safety in Lebanon.

Mr Cameron also announced that Richard Harrington MP would become the minister for Syrian refugees to make sure that those people coming to the UK are given a "warm welcome".

Last week the government announced that Britain would be taking in 20,000 vulnerable refugees over the next five years.

What's it like to start a new life in Europe?