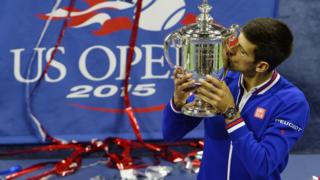 He won 6-4 5-7 6-4 6-4 and will end the year with three of the four tennis majors having won Wimbledon and the Australian Open earlier this year.

Roger Federer had been hoping to win his 18th major title and first for three years.

Serena Williams out of US Open in shock defeat