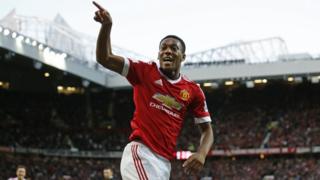 Another busy weekend in the Premier League is underway - packed with goals, debut performances and red cards.

Manchester United's £36m teenager Anthony Martial marked his debut with a stunning goal as Liverpool were beaten at Old Trafford.

Christian Benteke's incredible overhead kick had given Liverpool some hope after Daley Blind's goal and an Ander Herrera penalty had put Louis van Gaal's side in control.

Martial, the 19-year-old signed from Monaco, made himself an instant hero by dribbling between the Liverpool defence and scoring with his first shot for his new team.

United keeper David De Gea made his first appearance of the season and the win moves United up to second in the league behind rivals Manchester City. 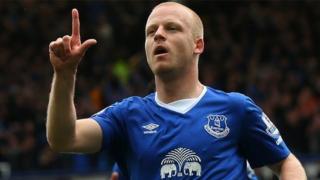 Steven Naismith scored a hat-trick for Everton as Chelsea's struggles continued. This was Chelsea's third loss in their opening five league games.

Naismith came on early in the game as a substitute and headed in Brendan Galloway's cross before quickly scoring a second to put the Toffees 2-0 up.

Chelsea responded when Nemanja Matic scored a stunning goal from 30-yards out.

With the game in the balance, it was Everton who made the best of the closing stages. Naismith took his chance to strike late on and complete his treble. 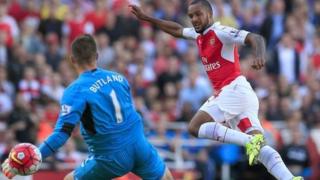 Theo Walcott and Olivier Giroud were on target for Arsenal as they recorded their first home win of the season against Stoke.

Walcott opened the scoring in the first half when he chased a long ball over the defence from Mesut Ozil before firing low past Stoke goalkeeper, Jack Butland.

Substitute Giroud made sure of victory late on with a header.

The result sees Arsenal rise to fifth in the Premier League, while Stoke, who have not won at Arsenal since 1981, are bottom. 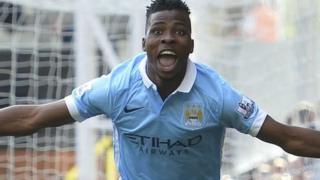 Premier League leaders Manchester City continued their 100% start to the season with an injury-time winner over Crystal Palace.

Sergio Aguero suffered a knee injury and was substituted in the first half, which could be worrying news three days before Juventus's visit in the Champions League.

Club-record signing Kevin de Bruyne replaced Aguero but it took until the last minute to seal victory for the away team. 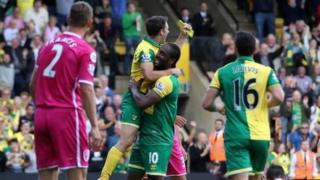 Wes Hoolahan inspired Norwich to an impressive victory over fellow promoted side Bournemouth.

Cameron Jerome opened the scoring after Hoolahan nutmegged Steve Cook and squared the ball to Jerome to poke in.

Bournemouth's in-form striker Callum Wilson hit the post late in the first half.

But Norwich continued to impress in the second half, with Hoolahan scoring from outside the box and winger Matt Jarvis adding a third on his debut before Cook headed home a late consolation goal for Bournemouth. 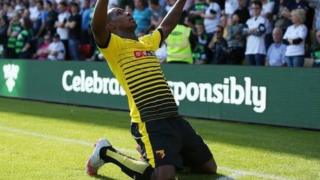 Odion Ighalo's second-half strike earned 10-man Watford their first Premier League victory of the season. The win comes at the expense of in-form Swansea who started the day in the top four.

The Nigeria forward reacted quickest to a knockdown from Troy Deeney and fired in from eight yards to score the club's first goal at home this season.

Watford were reduced to 10 men when Valon Behrami was sent off after appearing to stamp on Andre Ayew.

The win moves Watford up to 12th place, while Swansea drop to seventh. 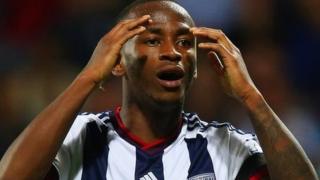 Saido Berahino returned to action for West Brom 10 days after saying he would no longer play for the club. The Baggies held on for a goalless draw with Southampton.

The hosts had a strong penalty appeal turned down when West Brom winger Callum McManaman dodged the lunge of Matt Targett.

Saints had the better chances, but Jay Rodriguez could only manage to head wide from a Dusan Tadic cross.

Berahino received a mixed response after coming on as a substitute, and looked rusty after missing three games.