What is the new Apple pencil? 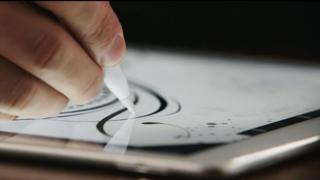 Apple just announced the new 12.9-inch iPad Pro, and it comes with something many thought Apple would never include: a stylus.

It's called the Apple Pencil, and it has pressure sensitive technology.

That's similar to how Samsung's S Pen works on its Note smartphones and tablets.

It's surprising they've announced this because famous Apple boss, Steve Jobs, once called pen-style devices as 'yuck' and something 'nobody would want'.

Steve Jobs, who has now passed away, co-founded Apple and was responsible for devices like the iPod and the iPhone.

Design-wise the Pencil is round, which means it could roll off a surface easily, and it's much longer than other styluses around.

But bosses say the new iPad and its pen is more powerful and charges super fast.

The new pencil doesn't come out until November, and it isn't cheap, costing more than £60, and that's after buying the new iPad Pro.