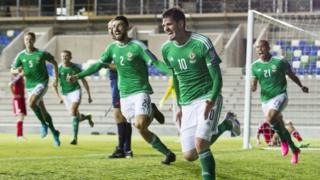 A late goal from striker Kyle Lafferty secured them a 1 - 1 draw in a match Northern Ireland's manager described as: "pure theatre".

This means Northern Ireland are now just two points away from qualifying for next years finals in France.

With two matches left to play against Greece and Finland, a win or two draws, would ensure Northern Ireland qualify for their first major championship since 1986.

What would it mean if your team qualified for Euro 2016?