The Prime Minister David Cameron has announced that Britain will take in 20,000 refugees as part of the response to the growing migrant crisis in Europe.

He said the refugees will come from camps bordering Syria rather than those who are already in Europe.

Pressure on the government to allow more refugees to come to the UK has intensified in recent weeks as questions about what to do with the huge numbers of migrants and refugees coming into Europe.

It's after tens of thousands of people, from places like Syria, Afghanistan, and parts of Africa, have come to Europe in the hope of a better future.

In a speech to the House of Commons Mr Cameron said Britain had a duty to help people in need. 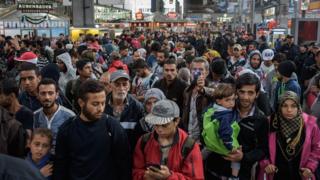 EPA
More than 10,000 people arrived in Germany over the weekend

Around 20,000 asylum seekers arrived in Germany over the weekend.

European leaders are trying to find a way to deal with the huge numbers of people arriving from other parts of the world.