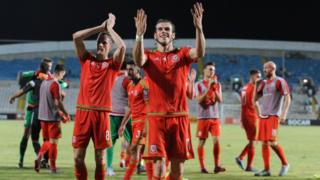 Wales are gearing up for their match against Israel today for the chance to book their place in the Euro 2016 finals.

They are currently top of Group B and have only lost once in their past 11 matches.

In June 2015, Wales claimed a huge 1-0 win against Belgium to regain the top spot in their Euro 2016 qualifying group and took a huge stride towards getting into their first major tournament for 57 years.

The four nations have never previously qualified for the same major international tournament at the same time - but all remain hopeful of reaching next summer's tournament in France.

Can Wales do it?

This chat is now closed, thanks for sending in your comments.

I think that Wales can qualify for the Euro 2016 because they have a very strong team and especially with Gareth Bale on their side.

Wales will qualify no matter what they're amazing! The score will probably be 3-0 (really hope that happens). Wales you are amazing, just try really hard and I know you'll win!

I think that Wales will win against Israel.

I think Wales can qualify! The score will be 2-0, so go on Wales!

I'm going to see them and I think Gareth Bale will score the wining goal. Good luck Wales!!

Gareth Bale career in pictures: from schoolboy to Real Madrid