Kermit the Frog says he does not have a new girlfriend 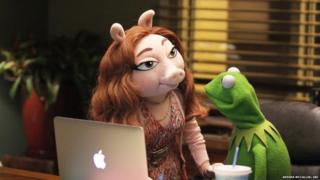 Andrea McCallin/ABC
Denise (left) appeared in the trailer for the new Muppets TV show, which was released in July

Kermit the Frog has denied reports that he's going out with a new member of The Muppets show, Denise.

The famous frog tweeted to confirm that he's dating again after he and Miss Piggy split up last month.

But Kermit said that he and Denise were "just good friends" and that he didn't have a "new girlfriend".

The new series of The Muppets starts on 22 September in America and will focus on the Muppets' personal lives and relationships.

Miss Piggy and Kermit the Frog split up

Muppets' message to William and Kate

Muppets get star on Hollywood's Walk of Fame