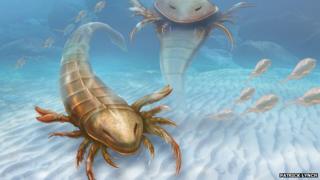 Scientists in America have found the fossil of a giant sea scorpion that lived nearly five hundred million years ago.

The creature was two metres long with a "helmet" shielding its head, a sleek narrow body, and large grasping limbs for trapping prey.

The fossil was found in the state of Iowa, in America.

Researchers say the monster is ten million years older than any other sea scorpion discovered.