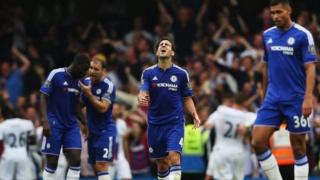 Jose Mourinho suffered only his second defeat in his 100th home league game in charge of Chelsea as Crystal Palace claimed a shock win at Stamford Bridge.

After a goalless first half in which Chelsea dominated possession, Palace took the lead with a shot from Bakary Sako.

Chelsea responded when substitute Radamel Falcao headed in his first goal for the club.

Palace regained the lead immediately as Joel Ward nodded in a late winner.

"It was a really good performance today - one of the best performances I've seen from one of my teams in terms of composure. We can frighten teams with our pace and we did that from start to finish. Our defenders had to defend really well and they did" said Palace boss Alan Pardew.

Getty Images
Bakary Sako scored his second goal in as many games, as well as setting up the Palace winner

They have been far from convincing so far this season having collected just four points, with only one of those picked up on home soil.

Aston Villa 2-2 Sunderland: Sunderland are still searching for their first win of the Premier League season after earning a point through Jeremain Lens' second-half equaliser.

Liverpool 0-3 West Ham: West Ham won their first league match at Anfield since 1963 and inflicted a first loss of the season on Liverpool in a game featuring two red cards.

Tottenham 0-0 Everton: Tottenham remain winless in the Premier League after being held to a goalless draw by Everton at White Hart Lane.