Commemorations have taken place in the US city of New Orleans to mark the 10th anniversary of Hurricane Katrina.

At a memorial service, Mayor Mitch Landrieu recalled how residents had turned to each other for support.

Former President Bill Clinton later spoke at a concert in the city.

Hurricane Katrina killed nearly 2,000 people and displaced one million. It was the most expensive natural disaster in US history. 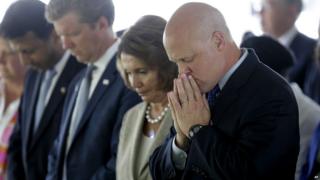 "We saved each other," the mayor added. "New Orleans will be unbowed and unbroken."

After speeches, a parade took place through the neighbourhood, with some participants in colourful Mardi Gras dress. 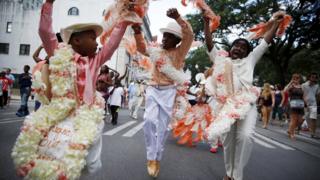 "It is kind of bittersweet. We want to celebrate because we are still here, but a lot of people are not," said resident Natasha Green.

"It is important to remember what we went through here." 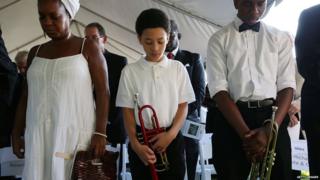 Getty Images
Prayers were said at the Hurricane Katrina Memorial

Throughout the day, thousands took part in traditional musical parades through the city's streets.

President Barack Obama visited New Orleans on Thursday, praising "the extraordinary resilience of this city and its people".

Hurricanes to heatwaves: US hit by extreme weather

How to clean up after a cyclone