A tropical storm has devastated the Caribbean island of Dominica causing floods and mudslides.

The damage caused by Tropical Storm Erika has set the country back 20 years, its prime minister said.

According to officials, the storm has killed at least 20 people, with at least 31 people reported missing.

Neighbouring islands of Haiti and the Dominican Republic are now expecting very strong winds too. 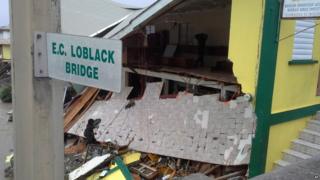 AP
A church collapsed in the centre of Dominica's capital, Roseau

A state of emergency has been declared in the US state of Florida, where the storm is expected on Sunday.

Dominica's Prime Minister Roosevelt Skerrit said in a televised address late on Friday that hundreds of homes, bridges and roads had been destroyed. 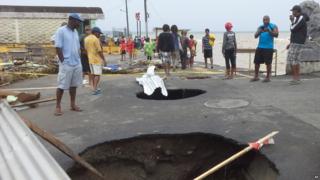 He said: "It is with heavy heart that I address you, you can well imagine the hell that it has been for me since I heard of the passing of Tropical Storm Erika and the damage it has done to our dear people and beloved country. But we all have to pull ourselves together.

"The extent of the devastation is monumental. We have, in essence, to rebuild Dominica." 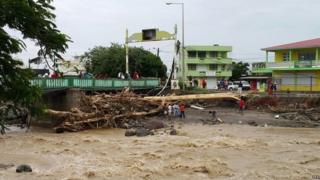 EPA
Dozens of people are missing

Guide: What is a tropical storm?

Hurricanes to heatwaves: US hit by extreme weather