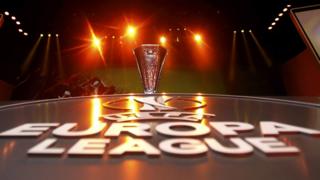 The draw for the Europa League group stages sees Tottenham travelling the furthest to face FK Qarabag who play in Baku, the capital of Azerbaijan.

Spurs were drawn in Group J along with Monaco from France and Anderlecht from Belgium.

Liverpool also have a long journey to play Russian side Rubin Kazan. Also in their group are the French-side Bordeaux and Swiss club Sion.

Celtic will play dutch side Ajax and Molde from Norway.

The Scottish Champions will also be facing Robin van Persie and Nani's new side Fenerbahce from Turkey.

The first matches will be played on September 17.