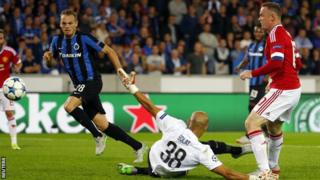 Wayne Rooney scored a hat-trick as Manchester United beat Belgian side Club Brugge to book their place in the Champions League group stages.

United led 3-1 from the first leg and Rooney added three good goals ending his run of ten games without scoring.

This means Manchester United won 7-1 after adding the scores of both games together.

"I think we were very organised. We played the ball a little bit more simple than before. You can create gaps and we scored so that is also good.

"Every goal shall give confidence to every player, even Wayne. I'm very happy for him.