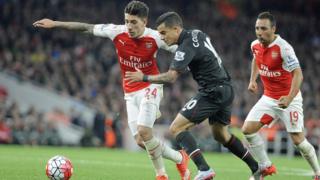 Liverpool continued their unbeaten start to the Premier League season as they played out a thrilling 0-0 draw with Arsenal at Emirates Stadium.

Both sides had great chances to grab a winning goal but Arsenal goalkeeper Petr Cech made some brilliant saves to keep his side in the match. 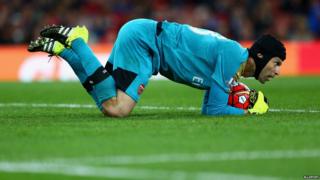 ALlsport
Petr Cech making a save

Liverpool dominated the first half but Petr Cech saved a shot from Christian Benteke and turned Philippe Coutinho's shot on to a post.

The Gunners have only taken one point from their two opening home games, while Liverpool recorded their third clean sheet in a row. 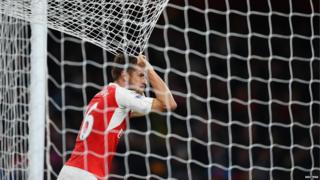 Reuters
Aaron Ramsay holds on to the goal net

"We had chances, but we couldn't finish them off. When you play at home and don't win, people always find problems.

"It is not the result or the complete performance, but we came back in the second half."

"I thought we were very good. First half, Petr Cech was the man of the match.

"Second half, we were always a threat going forward. The players worked ever so hard."