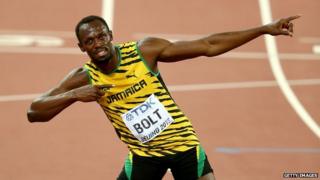 Bolt had stumbled out of the blocks in winning his semi-final but managed to run a season's best time of 9.79 seconds to win in the final.

Justin Gatlin had been unbeaten in 28 races and started off as favourite after running a fast time in his semi-final.

But there was no beating Usain.

The Jamaican took the title for the third time.

World Athletics Championships: Ones to watch