'Oldest' message in a bottle found after 108 years 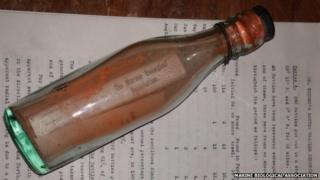 Marine Biological Association
One of the 1,000 bottles that were thrown into the sea between 1904 and 1906

A postcard inside a bottle that washed up more than 108 years after it was thrown into the sea may be the world's oldest message in a bottle.

The bottle was released in the North Sea between 1904 and 1906 and found on a German beach this year.

The postcard inside asked that it be sent to the Marine Biological Association of the UK.

The association say the bottle was one of 1,000 released as part of research into ocean currents. 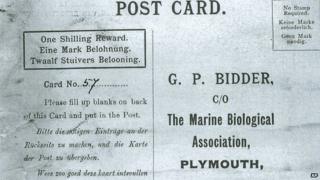 AP
The postcard offered a small reward for returning it

The association said it was waiting to hear whether it was a world record for the oldest message in a bottle found.

The existing world record for the oldest message in a bottle is 99 years and 43 days, found west of the Shetland Islands in July 2013.

'Oldest' pieces of the Koran found in university library