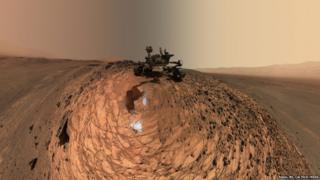 The US space agency Nasa has issued a "selfie" portrait from its Curiosity rover on Mars.

The latest picture was taken by the rover at "Buckskin", which is the seventh rock target on its mission.

Curiosity does this planetary photography in the same way we would take a selfie - by holding a camera at arm's length and framing itself.

The pictures must then be stitched together to make this final scene. 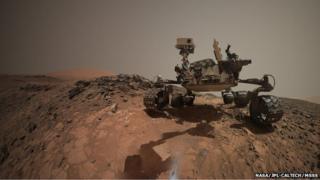 Nasa is trying to take one at every location where the robot drills into the surface of the red planet.

The robot has now been on Mars for three Earth years. It is in what's known as Gale Crater.

Curiosity is currently climbing through what's known as Mount Sharp, examining the rocks as it goes.

Scientists want to understand when and how Mars became so barren.

New picture of Mars from Curiosity