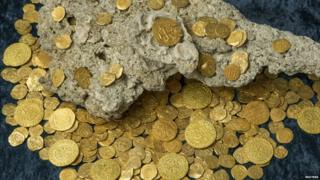 Treasure hunters in the US say they have discovered Spanish gold coins from the 18th century that are worth more than £2 million.

They think 350 coins were on the Atlantic sea bed, off the coast of Florida, for the past 300 years.

The coins are thought to be from a fleet of 11 Spanish ships, that sank during a hurricane, while making the journey from Cuba to Spain.

Treasure hunting is a popular activity in the waters around Florida.

The discovery is the second major find by treasure hunters in recent months.

In June, they found about 50 coins worth roughly half a million pounds.

The 350 coins, which were brought to the surface at the end of July, turned up in just a metre of water close to the shore, buried under the sand.

Under law in the US, the government in Florida get to keep 20% of the money from the find.

The diver who discovered the coins, William Bartlett, didn't say what his reward would be.