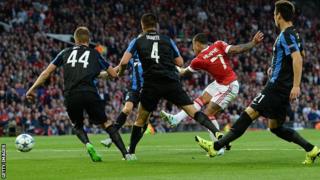 Getty Images
Depay made his third appearance for Manchester United

But Depay scored a goal from 25 yards to put United ahead.

Brugge defender Brandon Mechele was sent off for two bookings after 80 minutes.

Manchester United's Fellaini came on as a late substitute for Wayne Rooney to score their third goal, which was a header.

"I am happy because of the last goal. We have practised that before. We put him in the penalty area because he has that quality."

"You have a small chance at home but it is going to be very difficult. We tried to play with our qualities. We missed a lot of players."

PA
Two goals from Memphis Depay
Some of the stats: