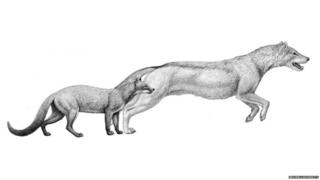 Ancestors of dogs living in North America 40 million years ago looked like cats.

Scientists at a university in America have been analysing fossils of the elbows and teeth of 32 different species of dog that lived between two and 40 million years ago.

They found that cats have elbows which allow their front paws to swivel for grabbing and wrestling prey.

Dogs were the same but over the years evolved elbows that pointed downwards.

This made them better at running long distances.

It's though that the evolution of dogs over millions of years was helped by the weather getting warmer and drier.

It meant that they became animals that no longer surprised their prey but chased and hunted them down instead.