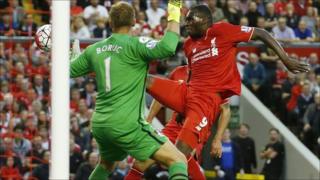 Liverpool beat Bournemouth 1-0 last night at Anfield thanks to a goal from Christian Benteke.

In his first game for the side at Anfield he scored the only goal after 26 minutes in play, protecting Liverpool's 100% winning start to the season.

There was some controversy surrounding the goal as some thought it should have been disallowed.

Phillipe Coutinho appeared to be in an offside position under new rules brought in this season.

Bournemouth manager Eddie Howe has said that he wants feedback from the officials about the decisions they made.

As Tommy Elphick's early header was also ruled out by referee Craig Pawson for a foul on Dejan Lovren.

Benteke came closest to adding a second goal to his impressive start when he struck the bar from close range in the last minute.

Liverpool face their first big test of the season next Monday when they go up against Arsenal, where they lost 4-1 in April.

Bournemouth will be hoping they can gain their first first points of the season when they face West Ham United on Saturday.