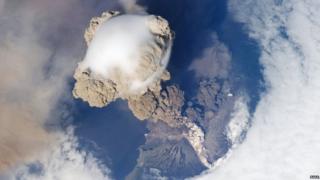 NASA
The view from space of the Sarychev volcano
What is a volcano?

Volcanoes are evidence of the powerful forces at work inside the Earth.

A volcano is a rupture on the Earth's crust, which allows lava, ash, and gases to escape, when magma rises to the surface.

The UK doesn't have any active volcanoes.

Are there different types of volcanoes?

There are three common types of volcano: composite volcanoes, often the most deadly; shield volcanoes, which are large but usually less violent; and cinder cones. 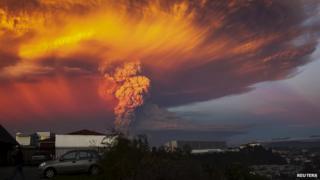 Reuters
Smoke and ash rise from the Calbuco volcano
What effects do volcanoes have?

Volcanoes can change the weather. They can cause rain, thunder and lightning.

They can also have long-term effects on the climate.

Fast-moving lava can kill people and falling ash can make it hard for them to breathe. Lava can also kill plants and animals too.

Can we predict when a volcano is going to erupt?

Scientists who specialise in volcanoes are called volcanologists. They are growing more and more confident at predicting when volcanoes will erupt in the short-term.

The further a volcano is from erupting, the harder it is to predict. Working out if a volcano will erupt in future years is still impossible.

Volcanologists combine several techniques to predict what will happen. 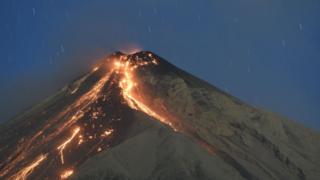 Getty/AFP
This is the Fuego volcano, which erupted in February 2018 in Guatemala

They use monitors to detect movement in the rocks that make up the volcano and in the Earth's crust. They also measure the gases that come out of the volcanic mountains, and even the angle of the slopes.

If an eruption is likely to happen very soon the behaviour of animals in the area can be a clue.

Animals often seem to be able to 'detect' when an eruption is coming, and they become agitated and worried.

And volcanologists are always trying to find new ways to detect eruptions. Some are now using satellites to try to understand how and when they may blow.

Do volcanoes do anything good?

Volcanic ash is very good for soil, which helps plants to grow after a volcano.

Volcanic slopes left after an eruption are very steep, so rare and delicate plants and animals can set up home there and be protected. 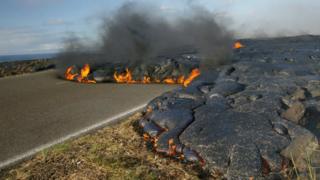 Getty Images
This is lava flowing out over the road from the Kilauea volcano in Hawaii in 2018. This volcano has been erupting since 2002.
Volcano facts