Victory over Japan Day - or VJ Day - was celebrated on 15 August 1945 and it marked the end of World War Two.

As the name would suggest, 15 August 1945 was the moment that the Allies - that is Britain, the US and other countries that were fighting together - marked victory over Japan.

After days of rumours about it, US President Harry S Truman broke the news at a press conference at the White House at 7pm on 14 August. Later at midnight, Britain's new prime minister Clement Atlee confirmed it, saying: "The last of our enemies is laid low."

The following day, Japan's Emperor Hirohito was heard on the radio for the first time ever when he announced the surrender.

That meant 15 August 1945 was officially named as Victory over Japan day and World War Two war was finally over.

What happened in the lead up to VJ Day?

The fighting in Europe ended in May 1945, but many soldiers, sailors and airmen from the Allies - which included the UK, USA and USSR - were still fighting against Japan in east Asia.

An estimated 71,000 soldiers from Britain and the Commonwealth died in the war against Japan, including more than 12,000 prisoners of war who died in Japanese captivity. Japan treated prisoners of war very badly, including American and British soldiers who had surrendered.

Following the end of the fighting in Europe, the Allies had told Japan to surrender on 26 July 1945, but the deadline passed without them doing this.

So the US dropped two atomic bombs on Japan, which it hoped would put a stop to the conflict once and for all.

The Japanese city of Hiroshima was bombed on 6 August and the city of Nagasaki was targeted three days later, on 9 August.

Around 214,000 people were killed in the blasts and Japan was forced to admit defeat.

Japan's emperor Hirohito described the atomic bombs as, "a new and most cruel bomb". 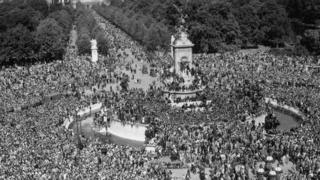 Getty Images
As news of the surrender broke, celebrations in the streets erupted across the world
How was VJ Day celebrated?

Millions of people from the allied countries took part in parades and street parties.

In London, soldiers climbed traffic lights and waved newspapers in the air, while office workers threw lots of paper out of windows, like confetti.

The official surrender documents weren't signed until 2nd September aboard the USS Missouri battleship in Tokyo Bay. This is why some people also celebrated this day as VJ Day and it is still remembered as a significant moment in the aftermath of World War Two.

Hear incredible stories from people who survived the Holocaust 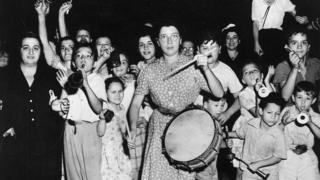 Getty Images
These people enjoyed a VJ Day celebration in Little Italy in New York on 6 September 1945, a few days after the official surrender documents were signed
What happened after?

People were very happy that the war had finally come to an end, but there was also a lot of sadness.

Millions of people had been killed during the war, so many people were facing the hardship of losing loved ones.

Our hearts are full to overflowing, as are your own. Yet there is not one of us who has experienced this terrible war who does not realise that we shall feel its inevitable consequences long after we have all forgotten our rejoicings today.

The government had to spend a lot of money on the war so clothes and food continued to be rationed to save money.

World War Two had ended, but it wasn't long before a new conflict came about called the Cold War, which lasted until 1991. 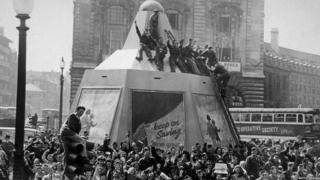 Getty Images
A few minutes after the Japanese surrender was announced, Piccadilly Circus was filled with a jubilant crowd - some of whom climbed on the plinth of the Statue of Eros