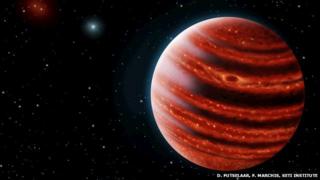 Astronomers have discovered a baby planet which looks like a young version of Jupiter.

The new world was found beyond our Solar System, 100 light-years away.

It's been named 51 Eridani b and is only 20 million years old - very young by astronomical standards.

The alien world could give us more information about the formation of our Solar System. 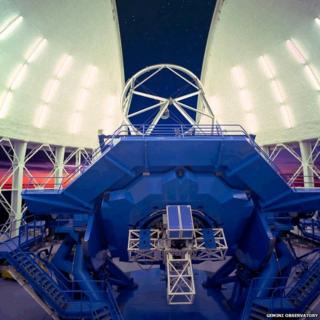 The find was made by the Gemini Planet Imager (GPI), which looks for young planets orbiting bright nearby stars.

Our own Jupiter is the largest planet in the solar system - it's so big you could fit over 1,300 Earths inside it!

It's also the fastest rotating planet too, with 1 day only lasting 10 hours - but a year on Jupiter lasts for 12 Earth years.

Jupiter doesn't have a solid surface and is made up of gas, giving it the name 'gas giant'. 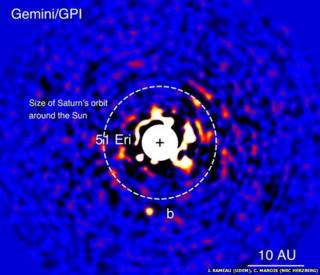 The baby Jupiter has the strongest methane gas signature ever found on an alien planet.

Scientists hope that by studying far away worlds, they can learn more about how common the structure of our Solar System is.

Astronomers believe the gas giants in our Solar System formed slowly - by building up a large core over a few million years and then pulling in a huge amount of hydrogen and other gases to form an atmosphere. This is known as a "cold-start".

But the Jupiter-like planets that have been discovered so far are much hotter than scientists have predicted. Which could mean they formed quickly - as gas collapses to make a scorching planet in what is known as a 'hot-start'.