England through to the semi-finals of the Netball World Cup 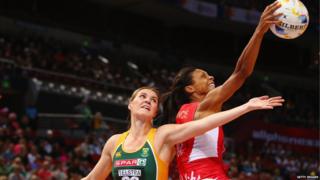 The England team has beaten South Africa to make it through to the semi-finals of the netball World Cup.

The game finished 62-46 with England facing New Zealand in the next round on Saturday.

The nickname for the England team is the Roses.

They're managed by Tracey Neville, who's the sister of former footballers, Gary and Phil Neville.

Australia are also the current holders of the cup and they'll face Jamaica in their semi-final.