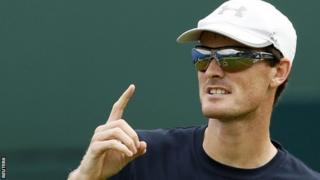 Jamie Murray beat younger brother Andy in their first senior competitive meeting, teaming up with John Peers to win in the second round of the men's doubles at the Rogers Cup in Montreal.

Andy and Leander recovered from 1-5 to level the second-set tie-break but could not recover.

AP
Andy Murray is the number two seed in Montreal

2007 Wimbledon mixed double champion Jamie said: "It's weird to not get really pumped up when you play and every time you look down the other side of the net, that's your brother there."

"I think Andy and I did a pretty good job of dealing with the situation, which was obviously not that natural. We're happy to win."

His younger brother said the match was "awkward."