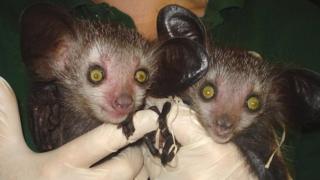 Twin baby aye-ayes have been born in captivity at Bristol Zoo for the first time.

The aye-aye is a kind of lemur, and looks a bit like a cross between a mouse and a bat.

At one point they were thought to be extinct due to hunting in Madagascar, an island off the southeast coast of Africa.

Lynsey Bugg, from the Zoo said: "Their mother was very secretive and we didn't realise she'd had twins straight away."

"It's a world first, so it wasn't what we were expecting but it's amazing, really amazing.

"We wanted to monitor them and make sure they were putting on weight before we announced their arrival." 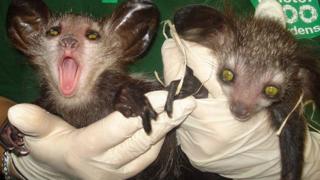 Aye-ayes have been born in captivity in Britain before.

But this is the first time that twins have been born.

Lynsey said that the twins' mother Sabrina was doing a "great job with her young".

"The twins are physically demanding and it is testament to Sabrina that she and the twins appear to be doing really well," she said.

"Whilst we are keeping a close eye on the group, we try to adopt a hands-off approach and encourage a family dynamic close to one they would experience in the wild."