A parrot, feared extinct, is found in Australia 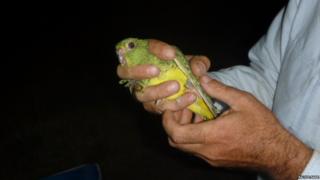 The mysterious night parrot is one of the world's rarest species.

Now researchers have finally managed to capture and tag one of the birds, as part of a project to protect the species.

It had been thought the species was extinct for at least 100 years since if had been so difficult to find.

Although some people have said that they have seen the bird, no-one has been able to take good quality photos to prove that they really had seen a night parrot. 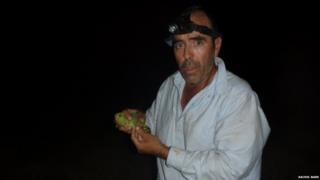 Now, researchers have taken photos, and feather samples that prove the species is still alive.

The parrot was fitted with a tracker, so that researchers can now continue to learn more about it.

They have found that it stays in the same nesting site, but travels up to eight kilometres each night to find food. 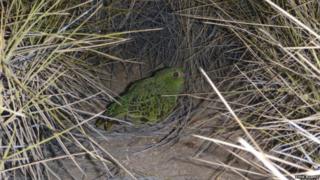 Steve Murphy
Night parrots are nocturnal - they only come out at night.

It's not clear how many night parrots there are yet.

But researchers say that they will keep the location a secret for as long as they can, to try to protect the parrot from being disturbed.

Endangered frogs with no tongue bred in UK

African penguins close to extinction in the wild