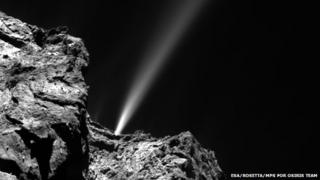 Comet 67P has now passed the closest point to the Sun during its six and a half year orbit, with the European spacecraft Rosetta still in orbit around it.

It was 186 million kilometres from the Sun - a distance that puts it between the orbits of Earth and Mars.

This landmark even is called "perihelion".

The Rosetta team has been studying the small, icy world as it warms up.

It has released dust and gas, including a very bright jet, which was seen on 29 July.

Dramatic images of this outburst - the brightest jet seen so far by Rosetta's cameras - were released on Tuesday by the European Space Agency.

The material released by comets, as they become more active on approach to the Sun, is the reason for their long tails when they appear in the night sky.

This particular jet was caused by frozen ices turning to gas and pouring out into space.

It was bright but brief.

ESA/Rosetta/MPS for OSIRIS Team
The jet is seen appearing and fading in these images, taken at 18 minute intervals

Three photos, each separated by 18 minutes, capture it appearing and fading.

It's spent the past few months in orbit, getting itself as close as 30km to the surface of the duck-shaped "icy dirtball".

In the last few months, increasing flows of dust around the comet have forced the probe to move back.. 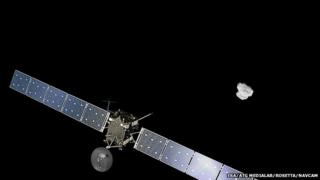 Where is the Philae lander?

The Philae lander, is still on the comet's surface, but is not communicating.

After Rosetta dropped it onto the comet in November 2014, its historic but wayward landing ended up in the shade making it difficult for Philae's solar panels to charge its batteries.

It has only briefly "phoned home" again since, and controllers aren't sure if they will ever regain a stable line of communication between Rosetta and its sleeping lander.

Top facts about the Comet 67P and space probe on it