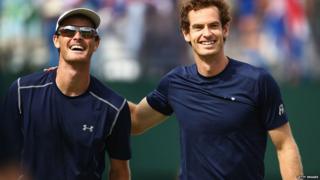 British number one Andy Murray will play his brother Jamie for the first time at the ATP Rogers Cup in Montreal, Canada.

The brothers have never met as professionals at the tour level before.

"We've not played each other for a long time so it'll be nice in some ways", said Andy.

They'll take each other on in the doubles tournament on Tuesday.

Andy and Leander Paes beat Jeremy Chardy and Kevin Anderson to set up the second-round tie with Jamie and doubles partner John Peers.