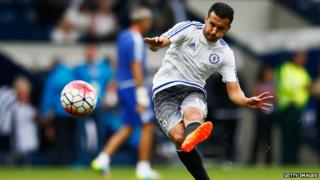 Chelsea's new £21 million signing Pedro helped the Blues to their first win of the Premier League this season.

Two goals from West Brom's James Morrison wasn't enough for the Baggie's, and despite captain John Terry's sending off for a second-half foul on Salomon Rondon, the champions clung on to take home all three points. 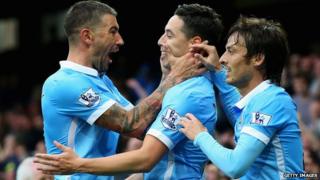 Three points and three wins for City puts them top of the table.

Romelu Lukaku shaved the bar with a free-kick for Everton in the first half, but goals from Aleksandar Kolarov and substitute Samir Nasri after half time was enough for City to stamp their authority on the match. 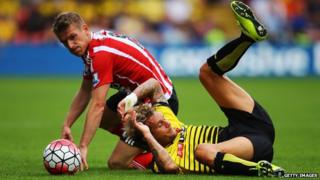 Not much to write about this one! Etienne Capoue had the best chance of the game for Watford... only to head over from two yards!

Both sides lacked any threat in front of goal, and remain without a win this season. Moving on... 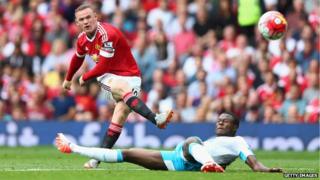 And the goals don't keep on coming... with another score draw, this time at Old Trafford.

The Magpie's battling display ensured they took a well-deserved point back to Newcastle, and proved they're no easy touch under new boss Steve Mclaren.

United were left frustrated after a quick start. Wayne Rooney scored but the goal was ruled out for offside. Aleksandar Mitrovic came closest for Newcastle, with his header hitting the bar, before Chris Smalling headed against the Newcastle post in the closing stages of the match. 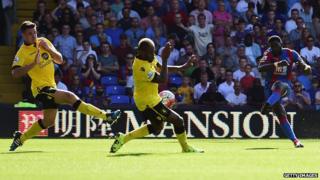 Crystal Palace staged a dramatic display at Selhurst Park on Saturday. The Eagles went ahead when Scott Dann headed in Jason Puncheon's corner.

Villa levelled when defender Pape Souare deflected the ball into his own net after Adama Traore's run. But Bakary Sako saved the day for the home side, netting a superb winner from outside the box in the 87th minute.

The result means Palace have got off to a great start having won two of their first three matches of the season. 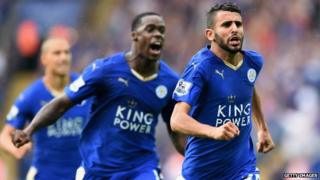 Leicester City remain unbeaten so far this season - but only just...

Tottenham scored first with just nine minutes left to play when Dele Alli converted Nacer Chadli's cross from close range. But much to the relief of the Foxes' fans, Riyad Mahrez's equalised just 90 seconds later with a left-footed strike with his fourth goal in 3 matches.

The home side had a chance to steal all 3 points late on but Spur's keeper Hugo Lloris saved Wes Morgan's header. 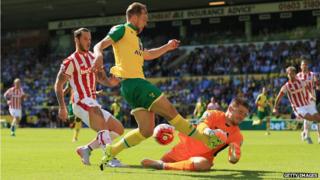 Stoke's new signing Xherdan Shaqiri got his first assist for the Potter's, curling in a free kick for Mame Biram Diouf to head in, 13 minutes into the first half.

Canaries defender Russell Martin shot through the legs of Stoke keeper Jack Butland to level the score just before the break.

But Butland came to the rescue in the second half, and pulled off four brilliant saves to earn his side the draw, and possibly ensuring a place in the England squad... 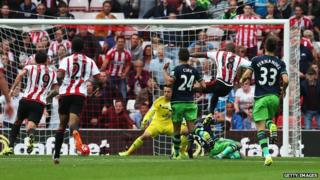 The Black Cat's have been in a sticky situation recently with unhappiness in the dressing room and some poor results so far this season.

But the home side managed to draw despite having just two shots on target to Swansea's nine.

Swansea took the lead when Bafetimbi Gomis was played in by Kyle Naughton, but striker Jermain Defoe levelled in the 62nd minute to earn Sunderland their first point. 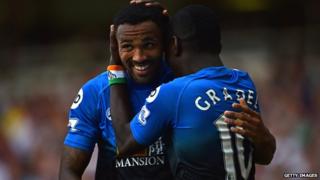 Wilson scored twice in the first half but the Hammers levelled thanks to a penalty from Mark Noble and Cheikhou Kouyate.

It wasn't until the 79th minute when Max Gradel, taking on Carl Jenkinson, was floored by the defender in the box. Jenkinson was off with West Ham's fifth red card of the season, and Wilson topped off his hat-trick converting the penalty.

Liverpool continued their unbeaten start to the Premier League season as they played out a thrilling 0-0 draw with Arsenal at Emirates Stadium.

Both sides had great chances to grab a winning goal but Arsenal goalkeeper Petr Cech made some brilliant saves to keep his side in the match.

The Gunners have only taken one point from their two opening home games, while Liverpool recorded their third clean sheet in a row.